The huge potential deployment quantity of Small Cell will have to meet scalability requirements for mobile core networks originally designed for much smaller scales of Macro Cell BTS. To solve this issue, the RNC feature is built into the Small Cell with a gateway to interface with the core network. Based on the TR-069 framework, the Small Cell management system is used for auto provisioning similar to the mechanism for huge-scale xDSL CPE deployments in fixed applications.

The popularity of mobile devices has increased exponentially in the last few years. According to a recent GSMA report, there were 3.6 billion unique mobile subscribers worldwide at the end of 2014, meaning half the world’s population has a mobile subscription. At the current rate of growth for subscriber population and data usage, mobile traffic is expected to increase tenfold by 2019.

Deploying Small Cell CPEs in households can be the answers because it can provide two key advantages to mobile operators to solve the bandwidth and coverage issues.

Typically, the propagation loss or penetration loss of mobile signals significantly reduces the speed of mobile broadband access, especially while users are located indoor or near the edge of Marco cell coverage. Based on the related studies, about 50% of the subscribers often have lower link speed or lower-than-average signal quality from the Macro Cell while they are home. Small Cell CPE can easily establish one Small Cell around the home to boost the connection locally, so that the subscriber can connect through it and enjoy better services.

Fast growing OTT (Over-The-Top) applications, such as social media and video streaming, eventually cause heavy network investment for base stations and bandwidth usage, but provides with little revenues return. Since Small Cell CPEs are designed to handle mobile traffic over IP packets, it can be simply connected with any broadband devices, such as DSL or Cable modem and pass through the traffic to Small Cell Gateway located in central office. Namely, mobile operators don’t need to build many new sites for Marco base station or backbone to connect each Small Cell, but simply leverage existing in-home broadband service, which is least expensive with almost unlimited bandwidth. Besides, mobile operators can leverage Small Cell CPEs as the best entry to home networks to create value-added services for home users for increased ARPU.

As the leading complete network solution provider, ZyXEL has introduced Small Cell CPEs to meet all our customers’ needs. Through collaboration with Alcatel-Lucent (ALU), ZyXEL UMTS Small Cell CPEs (FMT3211/ FMT3251) are field-proven to enhance mobile data and voice transmissions with optimal efficiency. As mobile broadband evolves to 4G/LTE, the ZyXEL LMT3313 was launched to offload the busy LTE macro network with a convenient plug-and-play design for rapid deployment.

With the tunneling technology, the ZyXEL Small Cell CPEs use the existing broadband link as a backhaul to connect to operators’ 3G/4G Core Networks to significantly reduce the CAPEX and OPEX. 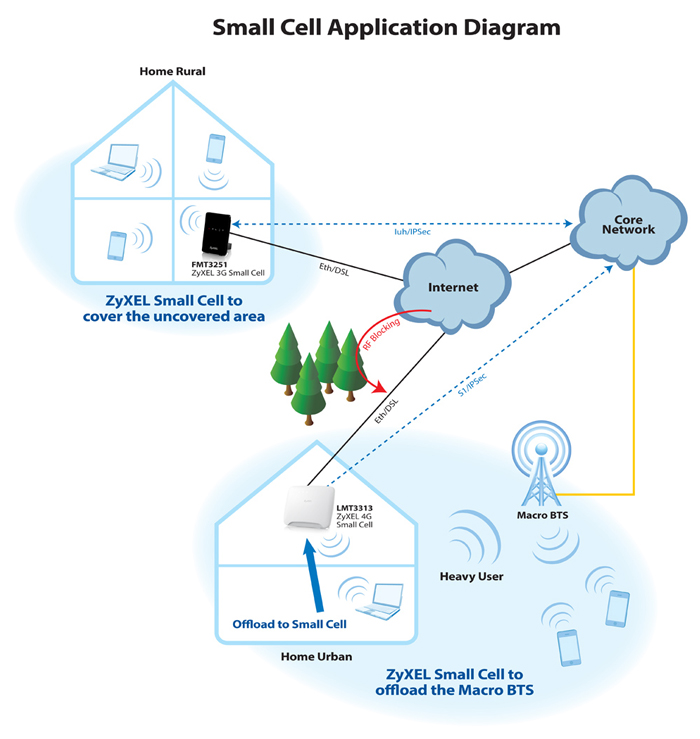 As depicted in the above figure, the ZyXEL Small Cell CPEs are installed in areas that are not properly covered by Marco Cells or Marco Cells are already overloaded. As described in the figure, buildings and terrains could also block the RF signals.

The application scenario of the ZyXEL Small Cell CPEs is shown below.

The small form factor, embedded antenna and stylish design of the ZyXEL Small Cell CPEs could be easily blended into the living spaces and reduce the stress brought by conventional access points with visible antennas.